The first camping trip of the year has come and gone. Sadly, it is one of only three destinations for us this season. It's a far cry from the monthly trips that we've grown accustomed to, but what we lack in quantity this year will hopefully be made up for in quality. We get to share these trips with our very special friends from the northwest.

It's been ten months since we said farewell to our best friends as they moved forward on a new journey in their lives and left Huntington Beach to live in Washington. I've missed them more than you can imagine and it's been a very long ten months without them. Despite that, as we pulled into Leo Carrillo State Park on Tuesday and saw their familiar SUV and smiling faces, it was as if we stepped into a time warp and no time had passed at all. The kids picked up right where they left off and the only thing that appeared to be different was that Ticia's baby bump had been replaced with the most yummy, buttery nine month old I had ever seen. 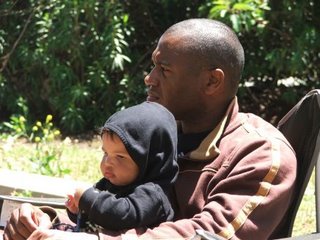 In keeping with tradition, we spent the first day talking about maybe getting up and going to the beach or on a hike. Discussion was as far as we usually get as our good intentions become nothing more than that...good intentions. The camping chairs and conversations usually get the better of us and we vow to actually get up and do something tomorrow. The kids enjoyed the campfire for a short while before we scurry them off to dreamland, eager for my favorite part of the night...sitting with the girls around the campfire. It's like mom's night out without the hassle of finding a babysitter and though the kids are just feet away from us sleeping soundly in their mummy bags, we're able to recharge and relax with adult conversations.

The weather was gorgeous when we woke up and we decided that an early hike would be great. Our destination was Charmlee Wilderness Park. Remembering from last year when we had hiked this park that there was a $3 parking fee, I was forced to indulge in a Starbucks VentiCoffeeLightFrappucinoNoWhip in order to break my $10 bill before we headed up the winding Encinal Canyon Road to the park. Armed with Luna bars, raisins, apples and lemon cookies to bribe the reluctant three year old with, we set off. The trail was much more overgrown than it had been last June when we visited and a warning from the the man in the nature center had us cautiously watching for rattlesnakes with every step that we took. We arrived at our destination quickly and were rewarded with an amazing view. 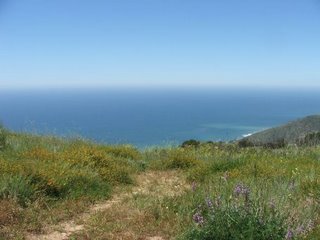 We stopped to regroup, eat some snacks and snap some pictures with that gorgeous backdrop. It was getting rather hot at this point and there was no shade in sight, so our break was short and we set off to finish the loop. 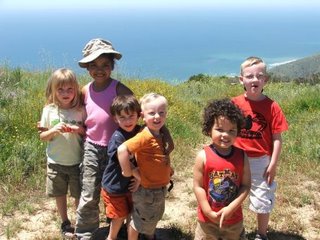 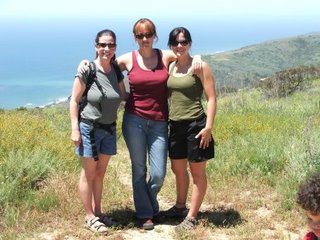 This happened to be a milestone hike for my little man. It was the first time ever that he did it all on his own, without me picking him up and having him freeloading for part of the hike. It took much encouragement, praise and bribery (did I mention the lemon cookies?) but he did it and he was so proud of himself. As we neared the end of the hike he looked at me and shouted "I'm a tough boy!!" I agreed, and my arms were thankful that at three and a half, he's finally decided to carry his own weight.

Worn out and hungry from our hike we all headed back to camp to refuel and rest a little before we headed to the beach. We decided on El Matador State Beach which is a few miles south of Leo Carrillo. The excited almost six year old in the family decided that skipping down the very steep dirt path with a huge dropoff was a good idea and I had to break out the "mean mommy" voice in order to reign her back in. Near heart attack behind me, we made it down to the beach and walked south a little bit to find refuge from the wind. I would normally post pictures right about now but my camera stayed safely in the case as we were being pelted by sand being fiercly blown in our direction. The kids didn't seem to mind and played happily in the water and up on the sand. It dawned on me while we were standing there being assaulted by this sand storm that it might have been a better idea to visit the beach in the morning when it was warm and calm, and then hike in the afternoon when it was windy, but you live and learn. We'll remember that next time. 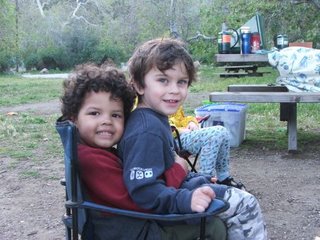 As we were leaving the beach Ticia was headed to the store and I asked her to grab some french bread and red wine. The bread was my attempt to liven up the Campbells Chunky Soup I was planning to feed the kids when we got back to camp. When they arrived back, we were all pleasantly surprised to find that they went all out and bought steaks! The chunky soup went straight back into the food box. We dined on salad, cheese and crackers, fresh fruit, couscous, steak and red wine. It was perfect!

Once the kids were snug in their bags, we met up at the campfire to talk the night away. I'm not sure of the time that we went to bed, but it was late, or early...depending on how you look at it. The morning came too soon and I had the realization that we always choose the night before we leave to stay up really late and indulge in alcoholic beverages, which makes breaking camp so much more painful in the morning. It's always worth it though, and I'm looking forward to the next trip. El Capitan and Big Sur are on the agenda...I can't wait!
Posted by Cycle Mama at 10:54 PM

Sounds like a great trip Brandy. Wish I could've been there! :)

I wish you could have been there too :( We need to do some better planning next year when we're through our school transition period!