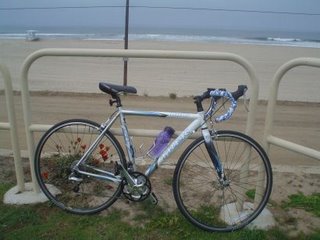 I think I might be, but that's okay. I've been enjoying my Mother's Day/30th birthday present, a Trek 1000 WSD road bike.

There is so much to learn about road cycling and I landed at a website that has been a tremendous help. Team Estrogen has a great women's cycling/tri forum and everyone there has been so helpful. I've acquired most of the gear that I need for now...I was practically living at the local bike shops for about a week.

Back to Team Estrogen...not only are the women there helpful in answering questions about getting started, they're extremely motivating as well. How motivating, you ask? So motivating that I've signed up to do the an organized ride in August...a mere 12 weeks from today. On Saturday August 19th, I will be riding the Cool Breeze Century up in Ventura. I have some time do decide which route to do, and right now it is between the metric century, which is just over 60 miles and the century, which is 102 miles. My decision will lie in the hills and just how comfortable I get with climbing...actually to be honest...it's the descending that I'm more concerned with at the present moment. I know that my comfort level will increase the more that I ride, so I plan to get in some hill training locally, train with the full 102 miles in mind and see where I'm at a couple of weeks before the ride.

So far my longest ride has been 32 miles, which I did on Thursday afternoon. I easily could have kept going, but it was James' only day off and I didn't want to be gone for too long. I was also able to get a 31 mile ride in on Friday morning. My plan had been to do 30 miles on my 30th birthday, but I threw an extra mile in for good measure. Looking at my mileage so far, I'm almost 1/3 of the way to riding a century...looking at it that way makes it seem less daunting. We have some camping plans and my best friend will be visiting for a month, so I won't get a ton of riding in during the next four weeks, but I'll sneak some rides in here and there when I can. Mid-June is when I plan to really step up my mileage and hill training for the Cool Breeze.
Posted by Cycle Mama at 2:21 PM